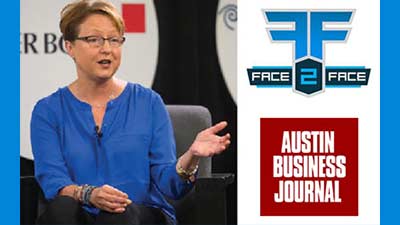 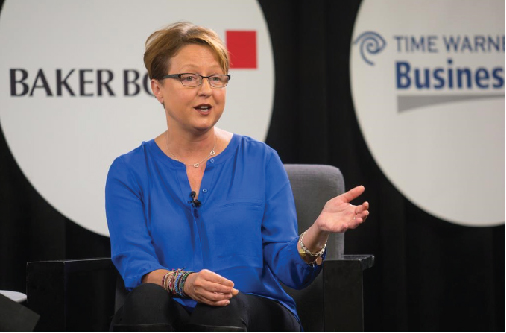 To become the successful CEO of a forward-thinking chemical company, Laura Roberts had to go from grade school to the school of hard knocks.

During the Austin Business Journal’s monthly Face 2 Face series event Tuesday at Whole Foods Market Inc.’s Austin headquarters, Roberts talked about the journey from teaching, which had been her lifelong passion, to leading Phoenix-based Pantheon Enterprises. The company, which has about 50 employees and customers such as Vista Outdoor, is innovating in the world of manufacturing chemicals by creating new formulas that have no negative impact on health or the environment.

Roberts became involved in the business world by helping to manager her father’s small but unprofitable cleaning chemicals business after his death, learning that she’d have to turn the company in a new direction for it to survive. Concern over the negative effects of many industrial chemicals, and concern over the world her children would inherit, caused her to take a green approach to the business.

“When I was younger I was a tree hugger and I had a ‘Kill Corporate America’ T-shirt,” she said. “But a big shift happened when I realized how much good we could do. The real bulk of the work is figuring out how you get people to change.”

Launching a whole new company wound up being the best strategy for making Roberts’ newfound passion a reality, but it wasn’t easy. She said she was denied by potential investors 300 times before she found one that believed in her vision.

“Only take money from shareholders who are purpose-aligned with you,” she said of turning down term sheets from venture capitalists who wanted almost immediate liquidity. “Not having that can kill the deal, or you later have to sell to get out from under them.”

Holding tight to her vision and belief that industrial companies can operate in an environmentally friendly way led Forbes magazine to call Roberts “The Toxic Avenger” in a company profile. She has embraced that characterization because it helped bring attention to the cause that Pantheon is trying to further.

“You’re in business to maximize shareholder value, but we’re trying to raise the discourse,” she said. “If you’re building profits on the backs of the general population then you’re not really approaching it right. The more transparent you are, the more your shareholders love you.”